What do the Police and Led Zeppelin have in common? Aside from releasing some iconic albums, both bands have sold millions, toured around the world and put out some of the biggest hits in the music business. They also have some of the most dedicated fans. So much so that some even form tribute bands to honour the music.

I was first introduced to bassist/keyboardist Paul Mathur in 2013 when I attended a show with his Led Zeppelin tribute band, Coda. Since then we've become good friends and I've enjoyed seeing him with Coda getting the Led out all around Southern Ontario. During the summer of 2014, his other tribute band played a festival in Toronto. 'The Police Review' put on an amazing show, covering some of the legendary band's greatest hits. Forming in 2010, by four musicians who are fans of the music, they are currently Toronto's only Police tribute band.

More recently, I had the honour of seeing them perform at a small pub in Toronto, Ontario. 'Scruffy Murphys' is a very nice place. A family restaurant with an authentic Irish pub decor and menu. You couldn't help but be impressed with the place. Dark wood throughout the bar and plush red seating. The staff was friendly and pleasant to deal with.

It was nice to see Paul again, having been awhile since the last Coda show. We were introduced to the rest of the band. As they began to set up at one corner of the seating area, it appeared they had minimal space to work with, but they didn't let that effect the show.


I had learned that they had not had the opportunity to perform together for a few months. Despite that fact, they still were quite amazing. Whether you're a fan or not of Sting/Police, you have to appreciate the talent that these four incredible musicians possess. The three sets consisted of material taken from 'Synchroncity', 'Ghost in the Machine', 'Zenyatta Mondatta', 'Reggatta de Blanc', and 'Outlandos D'Amour'.

The audience quickly warmed up to the band. During the 'hit' songs, they were dancing, cheering and singing along. The reception in the Pub was positive and it appeared the guys were enjoying themselves. 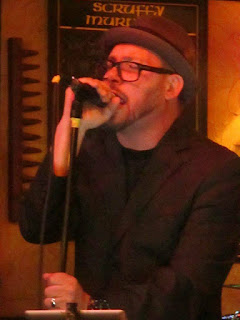 Vocally Paul Pimentel proves why he's the right man to take on the responsibility of frontman. His dynamic range is rather extraordinary. There's no mistaking that he has the ability to do the songs justice all while lacking pretension.

Unlike Sting who is known for not only his singing but his bass playing, Paul doesn't require a stringed instrument. His voice is his instrument and with that, he knows how to execute the lyrics meticulously.

To tackle some of the fan favourites, Paul fearlessly approaches the microphone with noticeable confidence and certainty that he will deliver his best performance each time. 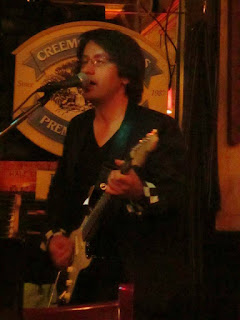 With great prowess, Frank Costabile handles the guitar duties as well as backing vocals, that appear effortless. With a laid back demeanor, but friendly disposition, Frank is quite the talented individual.

Although he's playing someone else's material, his own personal style and creativity comes out once the pick hits the strings. Every note, chord and solo, complements the vocals, drums and bass.

His picking was steady and refined with crisp, rich sounding solos. The dedication and passion comes through his playing. His backing vocals were strong but not overpowering Paul's lead vocals. The two sounded wonderful together.

Being no stranger to Paul Mathur, having seen him many times assuming the role of John Paul Jones in his other tribute band, 'Coda~The Raw Led Zeppelin Experience', I've always been amazed at both his bass and keyboard skills. 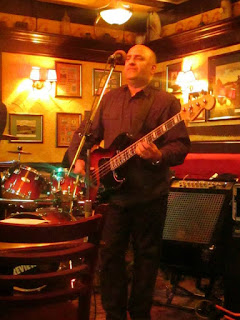 With Coda you get to see him switch from bass to keyboards and deliver equally mesmerizing performances. With 'The Police Review', he concentrates on bass along with the addition of a few pedals. Along with Frank, he also provided some backing vocals.

His playing is unique, yet distinctive to the songs that the Police made famous. Being capable of handling the catalogue, which contains hints of rock, reggae, punk rock, pop and even world music, is quite the feat. Instead of being intimidated, Paul approaches them with a gutsy confidence, minus any ego.

Keeping the beat for the band, is Joe Di Pede. With quick feet and fast hands, he's able to play the songs that require that punk rock style. Visually he appears relaxed behind the kit. It's been said that relaxed hands create more power when contact is made between stick and drum. Joe doesn't need to flail his arms around like a madman to generate the power that he can deliver with his own style of playing. 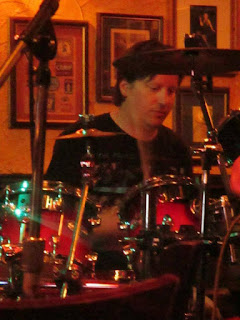 Despite the adrenaline that must be present when he's playing, he remains focused on the material and never misses a beat. Joe came out to do his 'job' and he successfully accomplished that, along with his bandmates.

It's hard to believe that they haven't played together live for awhile. Individually they are good, but as a group they are great.

The setlist included songs from various albums. The audience of course enthusiastically welcomed songs such as 'Roxanne', 'Every Breath You Take', 'Message in a Bottle', but still rewarded the band with cheers after every song.

With short breaks in between sets, the night progressed nightly, rounding up with the last set that contained the songs that everyone wanted to hear. Strategically it was a good move, it kept everyone anxiously waiting all night to hear those beloved songs. They were not disappointed.

Besides 'The Police Review', the members also have other commitments with other bands.  Paul Mathur, as mentioned previously does work with Coda. The Zeppelin tribute band can be seen playing various places throughout Southern Ontario.

Frank Costabile and Paul Pimentel can be seen jamming together known as 'The Coveralls Band'.

Joe Di Pede trades in the drumkit for a guitar to pay tribute to Oasis in 'Supersonic'. They have recently returned from playing a show in New York.

Overall it was an amazing night, with great friends and even greater music. I wouldn't necessarily call myself a Police fan, but I can admit that I had a great time and have more appreciation of the music after seeing the show.

Special thanks to Paul, Joe, Frank and Paul for being very welcoming, for the souvenirs and for a great night of music.

Posted by LedZepUFP/Kaotic Notes at 12:52 PM