Hell N Back: Back in Brampton 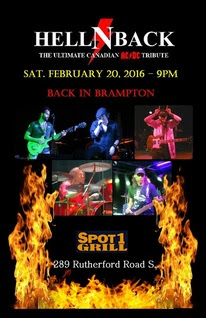 February marks the band's one year anniversary and they returned to Spot1 (Feb. 20, 2016) with an arsenal of new songs, band t-shirts for sale and the energy to deliver three sets of amazing AC/DC music, including performing the entire 'Back in Black' album during the second set.
​Throughout 2015, Hell N Back were relentless when it came to honing their craft. They added new songs to their repertoire, hit the stage whenever they could, and as a result of the hard work, their shows became a high energy rock and roll party. As a young band, naturally they would have a couple kinks that may need to be ironed out, but that will come with time and experience. At Saturday's show, despite some technical difficulties, they continued to deliver a great show to their audiences. True professionalism.​Indisputably, they are a talented group of individuals who clearly enjoy what they are doing and the electricity that they exude is felt by all in attendance.If they're having a good time, the crowd is having a good time. The excitement is contagious. 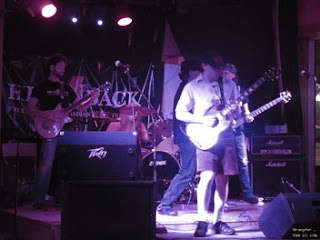 The band, James (vocals), Kyle (lead guitar), Jeff (rhythm guitar/backing vocals), Marty (bass/backing vocals) and Garry (drums) excel with their instruments and when they all come together on stage, it's quite electrifying.
As a vocalist, James has continued to honour both the Bon and Brian eras, with what seems like with ease.  A gifted performer, you can often find him down on the dance floor mingling with the crowd having a great time.Hell N Back have one of the greatest rhythm sections out there.  They are gifted with incredible drums, bass and rhythm guitar that shine during performances. 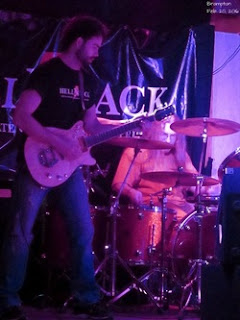 Jeff, Marty and Garry have that certain chemistry that when they're all on their game, they are a force to be reckoned with. Strolling up to the microphone to lend backing vocals, it's clear that these two men have a great time on stage. It's always entertaining to watch them.
Garry effortlessly drives the band. He brings the volume and intensity to the band. He is definitely one of the best in his field.


When it comes to the role of Angus, Hell N Back has one of the greatest up and coming guitarists to assume that role.
Once Kyle puts on that school boy outfit, he is transformed into the floor spinning, duck walking, stripping Angus Young character, all with impressive guitar playing while strolling throughout the bar and dance floor. 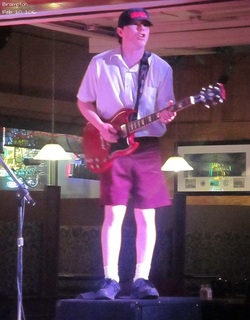 Each of these men have extraordinary individual talents but when they step on stage, they collectively become one of the best tribute acts currently playing around Ontario.

Saturday night was no exception. They returned to Brampton and kicked off the first set with 'Livewire'. They continued with the hits and after a short break, returned to tackle the entire 'Back in Black' album, which they had done at previous shows this year.

A third set kept the night going, people dancing and enjoying themselves. They did a few requests and eventually ended the third set with 'For Those About To Rock'.
It's always a great time at a Hell N Back show. They continue to work on new material and look for them playing more shows in the upcoming months.

Posted by LedZepUFP/Kaotic Notes at 3:33 PM