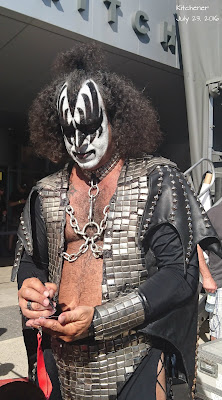 It may have been hotter than hell downtown at Kitchener's City Hall yesterday, but that didn't stop Canada's Longest touring Kiss tribute Destroyer from putting on an amazing show. Despite the sweltering heat, they were all extremely accommodating to the crowd who surrounded them for numerous photo and autograph requests.
The band closed out Kitchener's annual 'Rock and Rumble' event Saturday afternoon. Folks gathered at City Hall for two days to enjoy music, craft beer and food from some amazing food trucks. They were also there to share in the admiration of motorcycles that were on display, as well checking out the tables set up by some local home business owners.Shortly before 4pm, they took to the stage, for what would be their 1,130th show. Although it was my first time seeing Destroyer, by their second song I was hooked. Destroyer has indisputable passion that it takes to successfully portray the legendary band in all their full costume glory.  They were there to rock, and despite the extreme heat wreaking havoc on their instruments, occasionally knocking them out of tune, they still gave 100%, making sure to play some of the all time crowd favorites.
So who are Destroyer? Calling Southern Ontario home, they have toured extensively over the last 22 years. 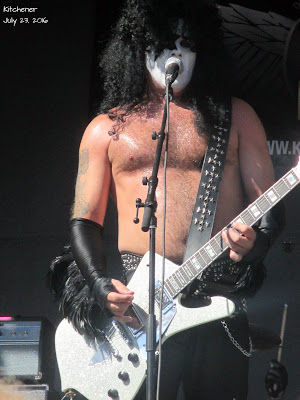 Ian Kurz shines as the Starchild. His posturing is dead on, not to mention, his appearance, his voice and guitar skills to round off the full package.The Peterborough native channeled Paul Stanley in all ways. Vocally, Ian did justice to the Kiss songs. Coupled with his guitar playing as well as mannerisms that made you feel like you were seeing Paul himself. Ian is no stranger to the live music scene. He's played at some of Toronto's hotspots, like The Opera House & Rockpile, performing his own original material. He's also had an original song on the Top 50 chart. His single 'Linger' knocked out fellow Canadian musicians, Nickelback & Three Days Grace. ​You can find more of Ian's original music on his official YouTubechannel and Reverbnation page.​Ian's Official Website can be found HERE 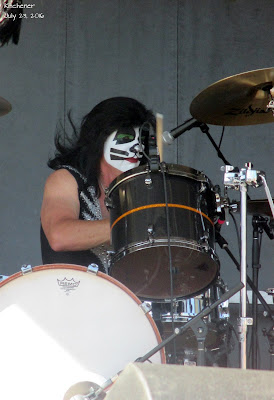 Donning the cat makeup that Peter Criss made famous and the seat behind the drumkit, is Windsor native Michael Chichkan.

Michael did an outstanding job throughout their whole set.

​Besides his talent at drumming, Michael also has a great voice, which was evident during the 1974 track 'Black Diamond' as well as backing vocals for a few other tunes.

It's always refreshing to see a drummer who can deliver that strong, heavy sounding beat, all without flaying arms and over exaggerated showmanship.
​
Michael looks right at home behind his drumset and was very approachable after the show with many fans who wanted a photo with him and/or autograph.

​During his fourteen years with Destroyer, he has done the Catman justice. 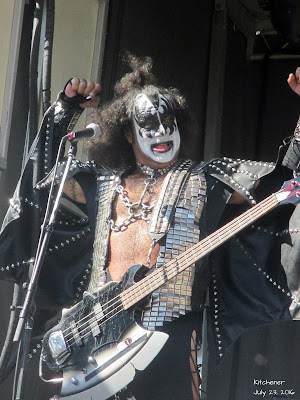 With the eight inch dragon head platforms, studs, chains and leather bat wings, Moe Rotondi's Demon is flawless.  Complete with tongue wagging, growling vocals, intimidating stares and strolls around the stage, Moe could have easily passed for Gene's double. He also managed to flick as many picks into the crowd as possible, making many kids, and adults smile. Moe started Destroyer back in 1993 and has perfected the onstage persona of The Demon. Along with is bandmates they've recreated the icon bands' music and stage shows over the last couple of decades.At a full Destroyer show, you can expect to see full pyrotechnics, huge Kiss sign and Moe spitting blood.Last fall, Moe was inducted into the Windsor Music Hall of Fame.  Congratulations to Moe for that honour. 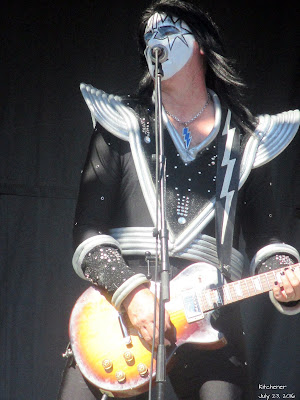 Rounding out Destroyer and stepping into the spacesuit to portray Ace Frehley's Spaceman role, is Michael Moodrey.

Being a huge fan of Frehley's, I was skeptical to see if  he could pull it off. I was instantly impressed with Michael's playing, singing and mannerisms on and off stage.  His guitar solos were spot on, singing was great and movements duplicated Ace's.

At one point, during the anthem 'Rock and Roll All Nite', Michael was down among the crowd, posing for photos all while continuing to play.

Following in the platform footsteps of his bandmates, Michael was extremely generous with his time after the set to meet the crowd.

While he may be the newest member of Destroyer, he is fantastic to watch and listen to.

The setlist ranged from early beginnings of Kiss right up to the title track off 1998's 'Psycho Circus'.

Classics like 'Cold Gin', 'Shout It Out Loud', and 'I Love It Loud' had the crowd pumping fists in the air and singing along.

​ 'Strutter', 'Detroit Rock City', 'Black Diamond', 'I Was Made For Loving You', 'Lick It Up' and 'Rock and Roll All Nite' were also included much to the delight of the crowd.

The only negative thing was that it had to end so shortly after it began. I will definitely be looking forward to checking them out again soon for the full production of a Destroyer show. 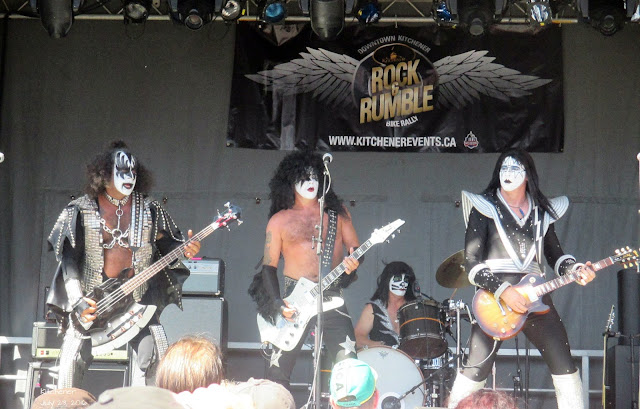 Much thanks to Ian, Michael, Moe and Michael for being very friendly, posing for photos with my son, and for putting on an amazing show for us Kitchener fans. See you all again soon!

To view more photos from their show, be sure to check out our Flickr album HERE.
Some videos from show on our YouTube Channel HERE.


Posted by LedZepUFP/Kaotic Notes at 2:45 PM