Hell N Back - Hard as a Rock in Oakville

'Hell N Back' delivered their high energy, rock and roll show, Thursday night at Oakville's Sixth Line Pub and Sports Bar. Having previously been to the Pub the weekend before to see James with his other band 'Rockin' a Hard Place', I was looking forward to their show and hearing the new tunes that were recently added to the setlist.

Since the first time seeing these guys in February, I have been impressed at every show how much they put into their performances. Regardless of the size of the audience, it's non-stop rock and roll throughout three hit filled sets.

Each individual band member brings to the band something unique. Collectively, they can be a force to be reckoned with.

Vocally, James has the ability,with his live presence, to assume the roles of both Bon Scott and Brian Johnson. Kyle, proves why he's the perfect Angus for the band. He has copious amounts of stamina in order to recreate the visuals that any AC/DC fan is aware of when watching the band. You couldn't ask for a better rhythm section than drummer Garry, bassist Marty and guitarist Jeff. Where most rhythm sections provide accompaniment to the vocals and lead guitar, this trio are equally important to make the band work as a whole. When they bring their A-game to a set, they are a well oiled machine that makes for a fantastic night of music.

They delivered an array of both Brian Johnson and Bon Scott led AC/DC hits. 'Highway to Hell', 'Back in Black', 'You Shook Me All Night Long', 'T.N.T' and many more to stretch over three sets.

It may have been a weeknight, but that didn't stop the guys from giving it their all and performing the crowd favorites. Midway through the first set, they debuted a couple numbers from the iconic 1980 release 'Back in Black'. Despite it being their first time playing 'Let Me Put My Love Into You' and 'What Do You Do For Money Honey' in front of a live audience, they still sounded amazing. Also included in the first set, was 'Night Prowler'. They debuted it at a previous show, but it was much tighter and personally was a highlight of the night for me.

James handed over the microphone to Catalyst vocalist, and friend, Al Reilly for 'TNT'. Later in the night the two would perform an impressive performance of 'Dirty Deeds Done Dirt Cheap'. 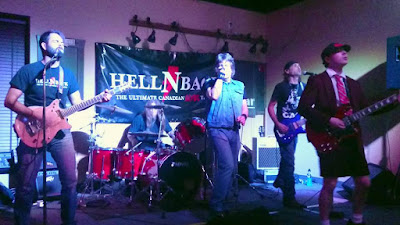 A 'Hell N Back' show isn't complete unless there's a strip tease, appropriately during 'Bad Boy Boogie', and James climbing chairs to belt out the lyrics for a song. That night it was 'Dog Eat Dog'. Their repertoire continues to grow as they are working on new material for future shows.

It was another amazing show by these guys who are equally great on and off the stage. They're always welcoming and it has been an honour becoming friends with them.

'Hell N Back' emulates the pure power and electricity of what an AC/DC show is all about and have proved to audiences that rock and roll ain't noise pollution. They deservedly earn the title of 'Ultimate Canadian AC/DC tribute'.

Special thanks to 'Hell N Back' for another amazing night of great music.


To find out where the boys are playing next, be sure to like them on Facebook and check out their official website for bios, media, gigs and lots more.


Posted by LedZepUFP/Kaotic Notes at 4:35 PM