The crowd may have been sparse at Sixth Line Pub in Oakville on Saturday night, but there was continuous non-stop rock and roll courtesy of 'Rockin' a Hard Place'.

Sixth Line Pub, is a friendly sports bar with numerous tvs to watch all your favourite sports teams. A couple tables to take in a game of pool, and an impressive size stage area. Not to mention friendly owners and staff. 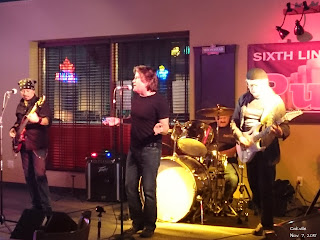 Occupying that stage area was 'Rockin' a Hard Place'. The Toronto based band delivers high energy rock with an equally high energy based set list that is sure to please everyone. it was my third time seeing the band, and like the previous shows, I had a fantastic time. (Previous Review)

The night began with a wonderful rendition of Led Zeppelin's 'What Is and What Should Never Be'. From that point forward, it was continuous non-stop rock and roll that stretched out over three sets, not to mention tunes from many decades. They set forth to contribute to everyone's fun night and in no time people were up and dancing. Whether it was songs from Zep, Queen, Rolling Stones or AC/DC to Alice in Chains, Judas Priest and Rick Derringer, 'Rockin' a Hard Place' successfully delivers a versatile song list that would please any music lover. 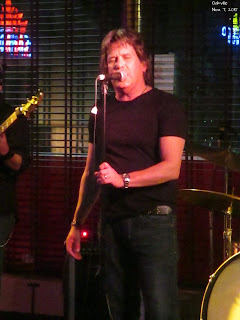 Like at previous shows, James would interact with the audience and ask them to choose between two songs for the band to play. He's no stranger to the open jam nights throughout the Toronto area bars, he's always one to jump on the stage at any chance he gets.

James is the epitome of a rockstar. His superb showmanship shines through no matter which band he is currently fronting. (James also fronts AC/DC tribute band 'Hell N Back').

The incomparable talent and dedication that he possesses puts him ahead of others in similar roles. Always one to challenge himself, he takes on difficult songs with a confidence that concludes with an extraordinary performance.

Case in point, the band decided to debut the Led Zeppelin bluesy masterpiece 'Since I've Been Loving You'. Some may have seen it as an ambitious move, but with a kick ass attitude, they managed to successfully pull it off. 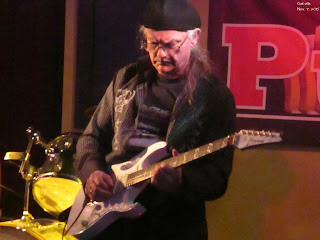 In order to be able to perform the varied songs that they cover at each show, you need a strong guitarist who can pull off the riffs and solos with ease.

For 'Rockin' a Hard Place', they are fortunate to have Andrew in that role. There's no denying that he is fully capable of tackling all the songs that the band decides to perform during the night. A consummate master on guitar, Andrew delivers familiar songs, but with his own unique way of playing and improvisation.

Outside of 'Rockin' a Hard Place', Andrew keeps busy by perfecting his craft with many projects. One of these being 'Heartless'. An incredible tribute to the Wilson sisters, performing all the Heart classics, with some Led Zeppelin covers throw in for good measure. 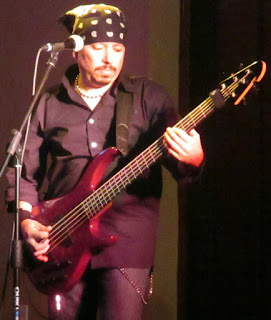 Sometimes overlooked and underrated, the bassist falls by the wayside. But on this night, the bass was at the forefront and sounded amazing, thanks to JD. Assuming his role to link the harmony of a song with the distinctive rhythm. He propelled the music along, with his distinctive groove.

Shining throughout the night, at one point he teased us with that all too familiar and beloved 'Dazed & Confused' bass intro.

While chatting with him throughout the night, I discovered that his musical tastes varies and to learn that he is influenced and plays everything from fusion, rock, heavy metal, it was quite impressive. You can hear some of his music HERE.

You can catch him performing alongside Andrew in 'Heartless'. 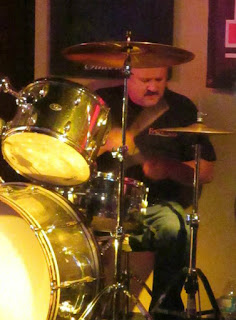 Backing up his bandmates, and holding the beat throughout the night was Brian Wall. He has toured with Michael White and assumed the role of John Bonham. He brings to his playing a distinctive swing when he plays. Powerful yet in control.

He understands his role in 'Rockin' a Hard Place'. As a drummer he is the foundation, the anchor of the band.

He can adapt easily to the song they are playing at the time, switching between the different eras of music.

Overall the four musicians make up an impressive band.


The three sets progressed nicely throughout the night. Despite the attendance at the bar decreasing prior to their third set, that did not stop them from taking the stage once more and delivering more music for the people who were there.

This was a prime example of sheer professionalism on their behalf. From the first song of the night to the last, it was nothing but passion and dedication to play the best they could.

Overall it was a good night. Great music and great friends.

I look forward to seeing them again and would highly recommend them to anyone who enjoys a hard working band who performs to the best of their talent.

Special thanks to James, Andrew, Jd, and Brian for an amazing time and always for being so welcoming to your shows. 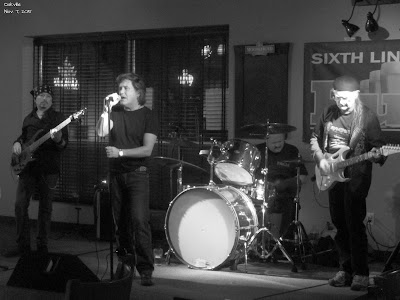 Posted by LedZepUFP/Kaotic Notes at 12:43 PM