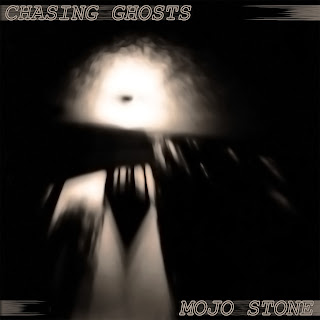 
In two short years, since releasing their self-titled debut album on December 15, 2015, Mojo Stone is back with their sophomore album 'Chasing Ghosts'. The nine songs on the disc present each member's growth since the debut release. The deeper lyrics and tighter arrangements allow each song to have its own dynamics that ultimately resonates with the listener.
After meeting Simon (vocals) in the summer of 2015, I had the opportunity to review Mojo Stone's first CD. From the very first listen, I was instantly a fan of what Simon, Nick (drums) and Ryan (bass) were trying to convey through their music. When I had heard that they were working on new material and a possible second release was going to happen in the Fall of 2017, I was eager to hear it.


'Chasing Ghosts'  was released on October 13, 2017.  Sometimes artists fall victim to the sophomore album curse. After listening to the the disc numerous times, it's safe to say that Mojo Stone has avoided that sometimes tragic end to bands just beginning to find their place in the music world.
One thing that I've come to appreciate with Mojo Stone's music is that they effortlessly appeal to a wider cross section of listeners than just those who may enjoy the classic rock genre.
If you're a fan of the '60s to the late '70s, then 'Chasing Ghosts' is just for you. As a listener, I can see how the songs could draw from the influences of the giants from those time periods.
The album does however, cross all eras and genres, and surely will have something for everyone who loves rock and roll. ​The trio do a brilliant job in playing their music with heart and soul.


On 'Chasing Ghosts', the vocals are profoundly powerful. Simon once again delivers his words with precision and passion, which is evident that he not only believes what he's singing but feels every word.
An extraordinary lyricist, you sometimes forget that this is a young man just barely out of highschool.  The words in the songs are reminiscent of an old soul who has felt the pain and sorrow.  You can hear this in the track 'Time Passes By'.
​Another stand out track that demonstrates Simon's vocal range and sincerity in his deliverance of the song is the sophisticated, yet haunting 'Calypso Calls'.
The structure of the song, whether it be intended to or not, takes the listener on a sonic roller coaster ride for five minutes.
All instruments, work well together and from the drums, bass, guitar and vocals, it showcases each member's astounding talent.


Ryan acts as a liaison for the drums and vocals/guitar. Throughout the album, he embellishes the groove yet remains in the bass player's role, in the pocket. A personal favourite track off the album is  'On The Killing Floor Again'.
​The first 13 seconds is just Ryan and there is that hook that draws you in. The track takes me back to John Paul Jones' iconic bass intro in 'Dazed & Confused'.
The track plays with vocals, bass, drums and when you throw in a harmonica on top of that, you have one hell of a game of tag. The play between the vocals and harmonica is striking and makes for a great song all around.
Ryan's playing adds depth to each song, along with a groove that collectively with Nick's drumming, they form a strong rhythm section which is a great asset for Mojo Stone.
Fast out of the gates and kicking the album off is 'Soul Sucker'. With an array of unbridled sounds and effects, the song is a foolproof way to introduce your album.


The commerciality of the album's first single, 'Lighten Up' could easily find it's home on any rock music radio station's playlist. You can't ignore the fact that Mojo Stone has a solid beat keeper in Nick.
Nick's drums are prominent throughout 'Chasing Ghosts'. He doesn't avoid the occasional fill if it's going to enhance the song overall. Anchoring the band, he maintains the tempo for each song.
​'Losing My Mind' is another one of those songs that begins with a hook and with addition of the guitar and bass, it keeps you there until Simon's vocals come in like a freight train.
​Track six, 'Tangled', is a labyrinth of guitar picking, with an intro that brings back memories of an early Led Zeppelin track. The fusion of lead and backing vocals give that haunting feel to the song. Yet again, another superb track on the album.

Much like 'Lighten Up', track three 'Come With Me', could without a doubt be a radio hit. At first listen to, this listener can pull a bit of what feels like a Doors influence, but don't get too comfortable. Within 30 seconds, the song kicks into second gear. It's just another great rock track on 'Chasing Ghosts'.

The heavy hitting title track 'Chasing Ghosts' is a wonderful blend of all the instruments, including vocals wrapped up in just over four minutes. It's one of those songs that is not overly produced or editted, and just comes down to being the perfect way to close the album.  ​
Sure you can make comparisons to legendary rock bands or even your local bar bands, but Mojo Stone is truly one of a kind group. The album overall is a great effort by the Buffalo, New York trio. There's no grandstanding by any member. They all excel with their instrument and with the numerous live shows that they've done over the years, it's greatly assisted in helping them hone their craft.
It has recently been announced on their Facebook Page, that after two upcoming concert dates, (December 9th & 31st. Both in Buffalo, NY), Mojo Stone will be taking a hiatus. Here's hoping that it is only temporary and we will once again will have some new music by these great talented men.


Extra special thanks to Simon, Nick and Ryan for the amazing music!
You can purchase 'Chasing Ghosts' at the following:
Official Bandcamp Page
​
Be sure to follow Mojo Stone on:
Official Facebook Page
Official Twitter
Official YouTube Channel
Official Soundcloud
Official Spotify

Posted by LedZepUFP/Kaotic Notes at 8:36 AM